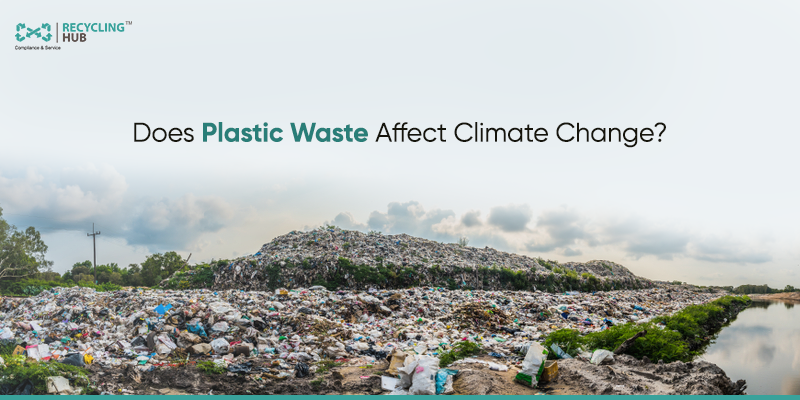 Plastic has penetrated most sectors, and currently, it is widely used in every aspect of human life, from manufacturing to carrying vegetables. Most of these plastic products are associated with single-use and are dumped once used. But have you ever thought about the bigger role plastic waste plays in climate change?

Luckily, manufacturers are now much aware of the impact of plastic waste on climate as well as human life. Because of this, their production lines are making collaboration with waste recycling in Ahmedabad. We aid these industries with expertise to manage their plastic waste through recycling to curb hazardous elements from the garbage.

But what adverse impacts does plastic waste have on climate?

The research found the presence of micro-plastic molecules in the soil is responsible for killing life under the earth, like mites, earthworms, larvae, and others. These creatures are also responsible for the fertility and health of the soil. That means microplastic pollutants are killing organisms and degrading soil quality.

Plastic waste burns into open grounds and emissions from industries release toxic gases like dioxins, furans, mercury, and polychlorinated biphenyls. Excessive amounts of these gases heat up the atmosphere and enter human and animal bodies through the nasals. Furthermore, microplastic air pollutants plants and trees that suffocate their photosynthesis process.

These particles are so small that even water treatment plants cannot filter them. We all drink this plastic-contaminated water, which is not good for our health.

Animals’ Lives are in Danger Too

We are not the only living things on the planet, but as we are the most intelligent species on the planet, our action does matter a lot for the entire ecosystem. Sometimes herbivorous animals like cows, elephants, goats, and others eat food covered in plastic bags, which they can’t digest. Ultimately, this can cause choking or even death in the worst-case scenario.

Similarly, marine mammals are also affected due to plastic being thrown by sailors or people on the beach. Every year, millions of fish, mammals, and other sea creatures suffer death after swallowing or messing into plastic bags or other stuff.

Most industries dump plastic waste into seas and rivers without eliminating toxic elements. This should be banned by the government.

Plastic pollutants are the major factor of ongoing climate change. When sunlight exposes plastic waste on an open surface, it releases toxic greenhouse gases into the atmosphere. These gases are responsible for increasing temperature, which makes our planet hotter. The change in earth’s temperature is affecting south and North Pole glaciers melting at a skyrocketing speed like never before.

Plastic recycling is a much important topic to avoid further degradation of soil and climate change. Manufacturers and municipal corporations around the world should consider it and take measures to implement it.

As Ahmedabad has numerous dumping sites across the city, it is feasible to follow the recycling process to treat plastic waste. Recycling Hub is a reputed plastic waste recycler in Ahmedabad. Its services can help lower plastic waste’s impact on the climate.